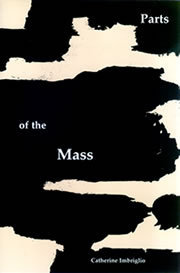 Parts of the Mass

The languages of scientific discourse and of Roman Catholic liturgy and theology add a measure of high seriousness to the playful investigations in verse and prose of Imbriglio's experimental debut. While it may be difficult at times to discern the reasoning that guides Imbriglio's spirited arrangement of sentences within a poem, or even words within a sentence, the book's insistently interesting verbal structures, textures and cadences suggest that the poet's responsiveness to language's physical properties is often her chief (and sometimes sole) interest and organizing principle. Occasionally, this aural fixation leads to clanging ("Here. Heresay. In here you'd say") and even silliness, as in her homophonic translation of Laudamus te ("We praise you," from the Gloria of the Latin Mass): "Loud, ah, uh, ah, uh, arm, moose, day, 'A.'/ Loud, ah, uh, ah, uh, I'm, mousse, te, eh?" However when Imbriglio commits to subtler effects, or to a less complicated expressiveness, she rewards the reader with an almost preternatural beauty ("The light on the cherry trees elaborates the fallen petals of the cherry trees") and a wonder-riddled quirkiness ("A fact we all agreed not to acknowledge: a billion Gainsboroughs into the space of this o"). These are moments wholly worth waiting for.

“By invoking the mass, Imbriglio sets us square in the middle of a ritual which takes as its premise at least two things: that a collection of words uttered by a collection of people has the power to produce a miracle of transformation (the bread becomes body), and that the broken body in turn gives power to the words uttered by those attending the mass. Imbriglio takes these assumptions and morphs them into an investigation of the relationship of word and body and word to incantatory power.... Her “Gloria,” for example, performs a gradual Zukofsky-like procedure on the Latin “et in terra pox, hominibus bonae” as she writes, for example, “Et in terra./Et in terror pocks./Et in terror pocks, ho, ‘meanie,’ buss,/bone, eh?” This phrase, often translated, “and peace on earth to men of goodwill,” resonates differently in their English homonymic translations.... One of the pleasures of this book is how much the poet invites the reader to think with her in this way; it is as if she creates a map of thought through language but gives no explicit directions and we are thus encouraged to set about the journey, readerly hand in authorial hand, through an expansive territory.”
—Christina Mengert, Reconfigurations: A Journal for Poetics & Poetry/Literature & Culture 1

“Part breathless run-on, part stacked chant, the shapes of Imbriglio’s individual poems wed urgency to order…. The masses in the text—beyond the apparent Catholic Mass and the human form as a mass—are the words. They are the “topographical shapes,” the physical features that engrave into the side of the rock, defined by the breath sweeping over…. The fluency of experience heals—not the fracture of portions, apportions, allocations. When elements are interchangeable, interstitial, brought together in rhythm and softened, division becomes union, partition becomes participation.”
–Joshua Hussey, Verse 25

Parts of the Mass
"This is a smart and wily book of poems, brilliant, clever, and courageous."
–Bin Ramke
Intimacy
"Scary, serious, beautiful and new..."
–Stephen Burt